“Some of Us Is All of That” Beaded hair is back.

Hair beads are an accessory or decoration added to a hair style that adds style, culture, and beauty. Like the Afro hair style, they have been warn since before the 1960s. Tres Mali, like Diana Ross, also has her own natural hair style.

At 8:25 a.m. 6/23/2012 I had a vision of President Obama and his daughter’s face, looks like they are posing for a picture with ish daugher on his lap. His daugher looks about three or four years old with a white band on her head. Tres Mali

The African-American Catholic Center for Evangelization:

Filed under Black Leadership in America

Desegregating The Alter, The Josephites and the struggle for Black Priest 1871-1960 by Stephen J. Ochs.

When I attended St. Mary’s Academy in Inglewood, California, we had a Black-American Priest. Now I only see African Priest, real Africans, not African-Americans. (Ha!!!!!Ha!!!!!). I pray that other Black-America’s that are interested in becoming Priest are protected, guarded, and shielded by the Holy Ghost to enter the vocation they are called to.

Filed under Black Leadership in America

On December 31, 2008 at about 10:00pm, I was on the Rose Bowl Parade Route camping out all night to get a good view. Talk Radio discussed Guerrilla Warfare of the United States of America.

Guerrilla Warfare is considered unconventional, it is small mobile groups. It sounds like Terrorist of today. These groups are called “militia”. The Klu Klux Klan is categorized as one of these groups as well as the Black Panther Party.

The White-American Democrats call Black-Americans “lazy” and “violent”. Sounds to me like they are talking about the Klu Klux Klan.

The Klux Klu Klan and the Black Panther Party in 2008 terms would be considered:

Filed under Black Leadership in America, Book: The Benefits I Recieve From My Past, Sayings/Quotes

The Los Angels Time and the Proper Noun Black-Americans

Several articles in the Los Angeles Times have used the word “black” in reference to a race. When referencing race, it is a proper noun “Black”. Birth Certificates say that race is “Black” is makes it a proper noun. I noticed that the words African-American are shown as proper nouns, I am not African, I am a Black-American.

Literally I am not African, and going by my Birth Certificate and not my sister’s, I am “Negro-American”.

Filed under Black Leadership in America, Book: The Benefits I Recieve From My Past, Sayings/Quotes

On 11/30/2008 at 4:45pm an Angel stated that the Spanish from Spain were being punished for taking some much land and are considered “Nigger”.

Once when I worked with “at risk” youth, a Regional Director explained this concept. He stated that he is Spanish from Spain and when new immigrates from Porto Rica and Mexico came to the United States in large numbers they started calling them minorities. Even though Spain is considered European. 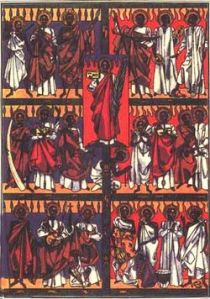 Martyrs of Uganda on A Black-American Experience!®

St. Moses The Ethiopian on A Black-American Experience!®

The tapestry on the walls of the Cathedral of Our Lady of the Angels in Downtown Los Angeles, California reflects the diversity of the Catholic Church and the Faith.

Moses the Black’s Feast Day is August 28, an Ethiopian hermit and martyr born into slavery, he was driven out because of his violence and evil. He was a leader of an outlaw band and hide in the Egyptian desert of Skete in the Delta region.

Moses the Black had many supernatural and mystical gifts.

Moses the Black became a Monk at Petra Monastery, was ordained by Theophilus of Alexandria. He was slain with six companions by Berbers, he refused to defend himself.

Saint Elisabeth of Portugal on A Black-American Experience!®

The tapestry on the walls of the Cathedral of Our Lady of the Angels in Downtown Los Angeles, California relfects the diversity of the Catholic Church and the Faith.

Elizabeth of Portugal is also called Isabella, her Feast Day is July 4th and was canonized by Pope Urban VIII in 1625. She was married at age 12 to a corrupt and immoral King Denis of Portugal. She is daughter of King Pedro (Peter) III of Aragon, Spain, her native land.

Elizabeth of Portugal overcame difficulties of her marriage and is called the “Peacemaker” by  Castile, Aragon, and Portugal because of her abilities to negotiate ends of disputes and conflicts and earned the respect of these monarchs of the Iberian Peninsula.