Written By: Crisis Reporter Tres Mali Scott, This Article is endorsed by The International Library of Paranormal Psychology (Written in 2008)

I am a Black Women in the United States of America, that has two Master’s Degrees and is an ABD Ph.D. in Counseling Psychology, an Internationally Awarded Poet, Author, and Top Rated Writer, “I Am Also Psychic”.

Some would say I am African-American, my birth certificate says I am Negro and my parents are Negro. My sister, who is six years younger than I am and has a birth certificate that says she is Black and my parents are Black. I am going to name all that apply, I am Colored, Negro, Afro-American, Black, and African-American. As I got older I found out that I am also Eastern Band of Cherokee Indian and Cherokee Nation of Oklahoma, African/Scottish, Irish, and Spanish.

I have had many experiences with spirits and ghosts of my heritage that has a lot of names. Many of them include stories. I hope they give you as much encouragement as I have received. It is not very often that Black people admit it is psychic ability. We report things as myths and tales. Some of these myths and tales were experienced first hand with a psychic vision that historically was not passed down orally or in writing.

Happy New Year! I look forward to your reading about Black Heritage, the untold stories. 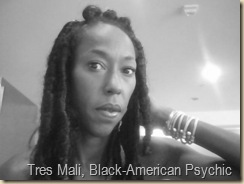 Filed under Black Leadership in America, Book: The Benefits I Recieve From My Past, News, Psychic Phenomena